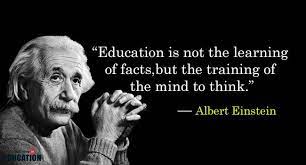 One of the shortcomings of our exam system is that there is far too much emphasis on rote learning and not enough emphasis on thinking skills,creativity and conceptual understanding of the course material.The annual science exhibition for classes 8,9 and 10 is an attempt to help students break away from their dependence on learning things by heart and,for a change,use their heads to think and their hands to make things instead.

About 35 students signed up for the competition. The judges Ms. Valentina D’Silva, Ms. Geeta Iyer and Ms. Clarissa Gonsalves visited their houses virtually via a video call to evaluate the projects and listen to each participant give an explanation about his project. In addition each participant had to submit a video of his project in which he described how it worked etc.

Here are the winning entries.

Congratulations to all who took part and remember this quote by Robert Heinlein..

And since we are talking about science and education here’s a look at the project submitted by an 18 year old irish student Fionn Ferreira – which won the first place at the Google International Science Fair 2019. He found a way to solve the problem of microplastic pollution in the oceans and water bodies – a solution that no one had thought of before. Quite amazing.